What is Enough in this Fast changing World?

– A time to prepare for value  reversal –

Note: This was written by Daryl Beach in 2008-2011. He passed away at the age of 90 in 2016. Some additions including photos were made later by his wife Yukie Miake Beach.

“If you want to know what my family had to go through in my childhood, you can read the grapes of wrath (Steinbeck). “

My name is Daryl Raymond Beach. I was born in a small farm house in Nebraska, USA on Valentine day 1926. Dad made all the buildings on the farm. I lived on two farms until the age of 17 when I graduated from high school. I had one classmate during the first 8 years of schooling. He was my twin brother named Dayle . Dad’s family was well-to-do with a land grant and a big 3-story house because grandpa and grandma Beach had attended universities of education. There were not many such graduates in Nebraska in those days.
Grandpa Curtis A. Beach(1849-1919) 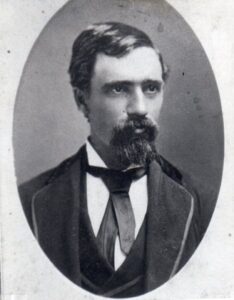 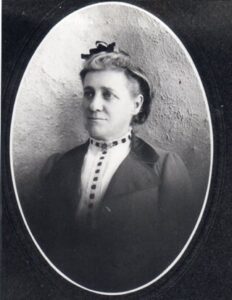 Their main job was to make schools –teaching was secondary. The house was designed as a community learning center with a Persian carpeted library and a ladder to reach books from floor to ceiling. There was a French room with French doors, Louis XVI furniture and French porcelain. A technology room contained many of Edison’s early creations, stereoscopes, stands for engineering drawings etc. An L shaped space with double paned windows housed tropical plants with Latin names attached. The double paned glass covered almost two sides of the big house. A music alcove with stained church-like windows and space for the local musicians faced a large room with pillars and oak floors for neighborhood dances. Our German neighbors could work up a storm with their accordions and fiddles. The 3rd floor and stairways were museums with Latin labels for insects in glass enclosures and examples of Indian relics comparing Nebraska Indian tribes. On top of the house a flattened part of the roof supported a telescope with a crank so Grandpa could study the stars at night. The house was on top of the highest hill in the county so it could be seen for miles. It was known as the Broadview house. The family lived on the 2nd floor.

Curtis Beach (grandfather) combined two houses into one prominantly on the highest hill in the district. Sometimes called “the glass house”, because the south side had a sunroom and the plant room. It fit no particular period, but was individual and unique, not just a farm house. There were no barns, no outside toilet; it had a power house and machine shed. Even the kitchen had fine oak floors.

Stained glass on the door was uncommon during that period. The big beams on the ceiling had the fancy finishing trims of that period, the woodwork was of dark wood. The sunroom had double panes in 9″ square windows and the plant room had single pane windows. Don (grandfather’s brother) said Curtis was always building something, but the women would have settled for a finished bathroom. The basement had no windows and consisted of a furnace and cannery room.

It had a harmonious atomosphere for study. There was a pump organ in the living room and it was played every day. The museum on the third floor where the bay grand piano, shells, books and interesting collectables were kept, and a door to the outside telescope which was placed on a flat section of the 3rd story roof. The telescope was Don’s, but Curtis also used it.

Mom was born in a practical Swedish family on a cattle ranch as the oldest of 9 children. A lightning strike killed her first husband when she was pregnant with my oldest sister.

She admired dad’s parents, aunts and uncles with their big dreams that sometimes resulted in big returns from inventions. Dad’s big plan was focused on two types of national currencies in circulation. One currency would continue to be issued by banks from bank loans and the other money would be issued by the national treasury to cover government expenses. Accounting would be expressed in per cents of annual national wealth. One consequence would be elimination of taxes with all its related costs and manipulation. He had answers for everything including the first reaction that the government would recklessly spend money. He typed papers on the idea late into almost every night. Mom was frustrated with his PLAN because she had to deal with seven kids –my five sisters, Dayle and me. After years of face-offs on the plan vs kids Mom warmed up on Dad’s efforts when the Oregon state historical society on his death requested all papers dad had written. A Society team searched throughout the house with white gloves for every paper and carried them to the Society headquarters. Mom was surprised that his papers include a letter from President Truman’s secretary of Treasury who wrote that the plan made pure sense in the public interest but the power of financial industry- banks, CPAs and related groups would prevent its political realization. 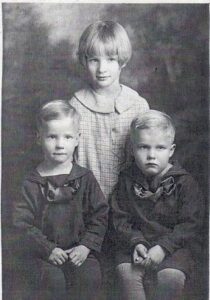 Dayle and I both became independently involved in proposals for global standards related to licensing later. After decades of no contact with one another we met in Oregon. We both had become involved with WHO, ISO (International Standards Organization and other worldwide standards groups. His standards centered on highway safety that included international driver’s licenses. My standards centered on conditions for global-local health care that included standards for multinational to global licensing of health professionals who only have state or national licenses today. I feel our common imagination for standards in the big picture mixed with enough pragmatism to realize some of our dreams stemmed from the imaginative Beach side and Mom’s Swedish family (Hedvall) pragmatism.

Mom and dad decided to make a small house. Perhaps the big and small Beach family houses near each other were one of my early exposures to ‘What is enough?’
Grandpa Beach was involved in the state curriculum and examinations for the early Nebraska schools. I am a product of their conclusions that Nebraskans needed basic skills with the Indo-Arabian 0123456789, the Latin alphabet and a world view in geography. Farmers could not afford teachers who went to college so all of our elementary teachers were young high school graduates with 2 years of ‘normal training’ in their 11th and 12th year of schooling.. I elected that course, took the 3-day state test and was assigned to teach 8 grades at the age of 16.

The lesson plans were specified by the state but teachers had a little time for electives. Each country school had 8 rows of desks. Each year school pupils moved up a row to larger desks. The teen age teacher faced pupils from a desk in front. Pupils sat on recitation benches behind the teacher’s desk when called to recite what they had learned. For practice teaching I was sent to a Slovakian district where the 1st graders could speak only Slovakian. The upper graders helped with translations. Immigrants from many countries prevailed on farms in those days so many children were bilingual – one language at home and English that we forced on them in school. It was unsettling for me to see pupils laughing while speaking their at-home language on playgrounds. The English-only policy succeeded because the next generation could speak only English.

We took a state test at the end of 8 years that appraised our mastery of numbers and the alphabet with some exercises in the arts such as reading music notes and drawing. “Honor roll’ pupils who passed with 90 or higher scores stood on a stage at a county meeting of all rural schools. Youngsters on the honor roll were mainly female but at that time muscle was more important to farmers.

From problems outside of school I have concluded that ability based in numbers is more important than abilities based in alphabets or other characters. Mom often repeated “mental arithmetic is the most important thing you can learn”.

This is now becoming clear in today’s fast globalizing world where all matters that link personal concerns with local and global concerns are best identified in numerically ordered sets where the order is conceived in relations of 0 and 1.

It is interesting that the 10 numerals were posted above the Latin alphabet on top of the blackboards in Nebraska’s country schools.

My farm life consisted of milking several cows by hand morning and night, feeding chickens and sheep, slopping the hogs, harnessing, driving and riding horses, shucking corn, haying, bundling wheat, oats and barley working in a threshing crew and driving tractors from the age of 8. A severe drought with dust storms combined with what is now known as ‘the great depression’ converted us from good living to poverty from my ages of 6 to 17. There was no electricity and only water from progressively deeper wells to drink. The shortage of water resulted in a wet towel bath once a week. (Today my Japanese wife must have 2 hot baths a day!!) We cut the dying trees to heat a small room during the severe winter weather. The room was quite cozy with parents, 5 sisters and a brother. 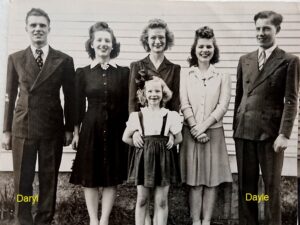 I have been feeling lucky ever since I left the farm and after 20 years of schooling. However my temperament, character, reactions to worldwide happenings and my world-scope views were formed by family life on a farm and in a 1-room country school. The attitude and fortitude of mom and dad with 7 wild kids in worsening times is a basic factor. 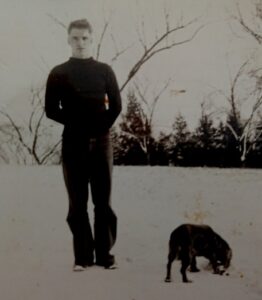