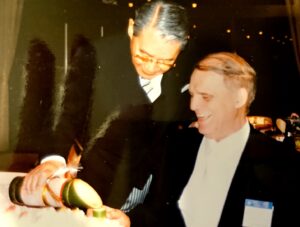 When I think about what people I want to spend time with, I also think of my limit of life. Time in my life is most valuable. When I meet people, I think ‘Is this person I want to spend more time with, less time with or no time with’. Of course, time goes on and you can say it is very useful to spend time with the person for a certain period of time, but things are changing which we can’t control. More recently when I think about time in life, I become much to face with global perspective, and am very much oriented to want to deal with people who value things in global perspective. Most people still live in nations and value things in a nation perspective. Today much of the conflict we have in terms of personal relationships, is if the person is based on nation-base value or global base value. More and more, though, things are moving toward global base, and we hear people speaking global. I’m not sure if “global” is the best term for this, perhaps another term is better. “Global” simply relates to the earth. The limit of global to me is earth gravity or biosphere of the earth. Biosphere is beyond nations. My respect for President Obama is based on his concern for changes in the biosphere of the earth. He has been emphasizing it and it is not a popular subject as being a nation politician. Nationalists think what is good for the nation and don’t care about outside of his nation. People who are nationalist many times link with universal. I’m very careful not to use the word universe because it is often used by nationalists. A Person who is global is more accountable like scientists who account in measurements and things of limits in global scope of concern. One god religions including Judaism, Islam, Christianity, often stemmed out in hot and dry deserts where you can see clear night sky of universe beyond the earth. Here in East Asia, religions have less emphasis on one God.
I respect people who are identified with the limits of earth and I don’t care to spend much time with people who are linking with universe. They often relate to after life. Also people who are money centered value are boring. They want to talk about how much money they are making and what they own and to me it is waste of time. Their value is based on money. A person who owns nothing is probably more interesting to be with, provided the person is nice to communicate with. What is most useful today? I would say my first point is that is it in a global scope of concern or interests, or is it nation. My first choice is global. People are moving fast that way. Numbers of year ago I was lonely and slow road to be to track.